By George I do think you've got it!!!

Now that you know how, you can post them one at a time or several in the same post by repeating the img button. Your choice!
Daily life IS spiritual exercise.
Top

hands clasped, slightly bowing Thanks Rick!
Our rights start deep within our humanity; they end where another's begin~~ SmileyJen
Top 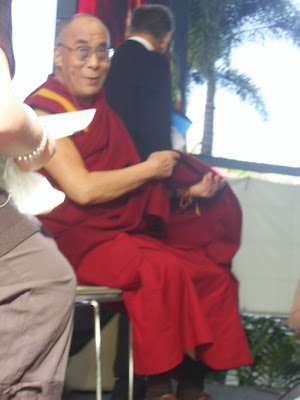 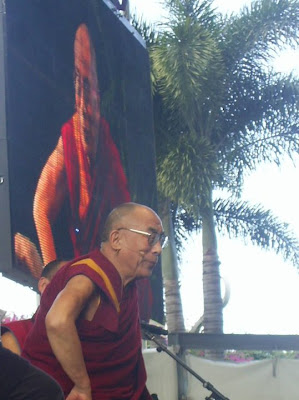 Listening and answering questions.
Our rights start deep within our humanity; they end where another's begin~~ SmileyJen
Top

This was very funny, our state (Queensland -Maroon) Rugby League team were playing a State of Origin match that night against NSW (Blues) as the afternoon sun came down and was getting hot for HH he put their logo cap on. He joked that the XXXX is 'a sport...right?' everyone laughed and I don't know if anyone had the heart to tell him it's their sponsor xxxx Fourex Castlemaine Beer! 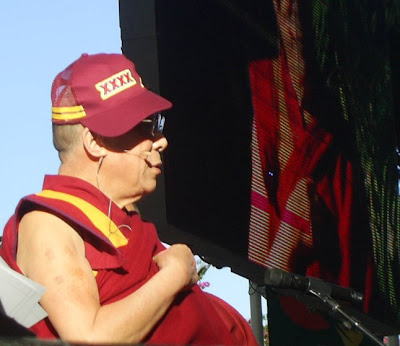 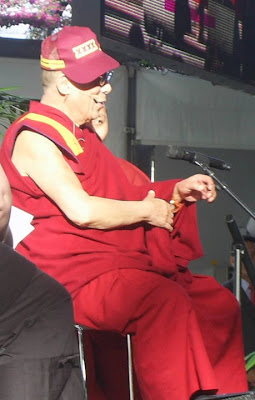 He was joking saying "I can't take sides you know!!'

This young woman was a guest of the hospice that organised the first event. She has ovarian cancer at age 32. She's been told she has a few months to live. While organising media opportunities her friend asked me not to let the media block her view of HH as he left. With a bit of juggling and negotiating we managed to get her a private (it's all relative in a 3000 strong crowd) moment with HH where he not only stopped to hug her and bless her, but spent a moment chatting with her. She and her friends agreed to me capturing the moment as a momento for her rather than having a media crush. The trade off with the media was that she was willing to be interviewed afterwards. She was open and candid, and very very affected by HH's attention as were any of us priveliged enough to share the moment with them. Her friends are still in awe and gratitude. One journalist asked what did it do for her, she said 'it gave me hope.'

The look/s on her face show it gave her so much more than that. There is no thing that love and compassion cannot make better in the moment.
Faith ~ Love ~ Hope 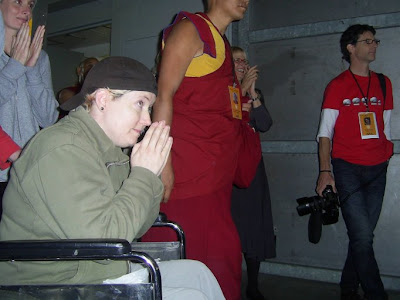 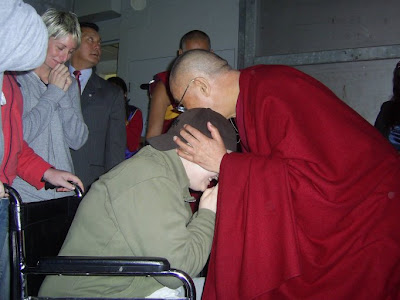 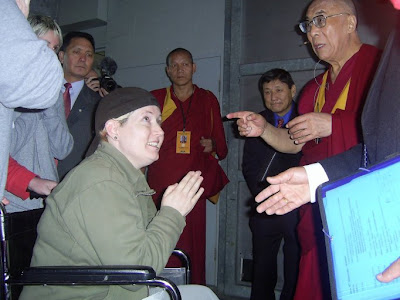 Thanks so much for all this great sharing, Jen. I savored your reports!

Jen,
Your reports and pictures are priceless. Thank you so much for sharing. Reading and seeing the pictures brought a wonderful smile to my face (I may even giggle later, when I am reminded of them

Thank you all for treasuring this little journey with me, it was absolutely my pleasure.

HH is appearing in Washington USA in a few days... happy to pass on the baton if anyone is attending. It is also going to be web streamed.

I love the joy of that Heidi, thank you. I only recently re-membered the translation - 'the God in me honours the God in you' ........yuuuuummmmmmmmm - no wonder we feel the urge to bow with love in the expression of it.


runstrails: Reading and seeing the pictures brought a wonderful smile to my face (I may even giggle later, when I am reminded of them)

'funny' (noticing and giggling) I wore the Love and Compassion 'Helper' tshirt to work yesterday and every single person 'smiled big time' at it and made a positive comment.

Smiling/commenting not at/to me, as they would normally do, but at/to it -the tshirt.
'Nice shirt'
'Wow, great' '
Ah, there it is'

It was a funny 'noticing' in the first place because I'm not a clothes-horse type of gal (yes yes I know that's 'limiting' lol!!) Normally I would not notice that anyone was noticing anything I'm wearing, much less smile at it, (it would normally mean i've spilt cake on it or something) or even that I would notice my noticing of their noticing lol... as I've been told how 'blind' I am to such things, and it's pretty true most of the time.

As I began to 'notice' it as a trend I started to pay even more attention to see what was happening in their interaction with the shirt.

It was like watching the honing of a pure beam of awareness in focus, and the focus was pure joy - in the presence of a tshirt with simply Helper in English and Tibetan on it and a logo on the sleeve with Love & Compassion.

The exponentiality of the way HH touches people of all faiths and paths, and how utterly he connects them to the notion/energy of love and compassion and hones their 'focus' is extraordinary.

On a fb group for the volunteers it's a source of laughs as folks put their photos up sharing the joy, one saying of a huge group one, all in red shirts.. 'I'm the one in the red shirt'

And then the beauty and truth of that is also ... slightly stunning....'the one'...
Our rights start deep within our humanity; they end where another's begin~~ SmileyJen
Top

from the 'group' this stunning little quote:

Who'd a thunk it?

OOh that's freaky - 4 years to the day since I started this thread, and I'm here to tell you again what a joy it was to be of service.

Last week I volunteered with the Dalai Lama again, 4 years since the last time when I took all the forum with me and posted those photos etc I still took topical things from the forum with me, the 'ego is my friend' thread, the serious-not seriousness of differences in perspectives.

I realised something very interesting being so 'infected' by his authenticity, and I mentioned earlier in this thread all those years ago... he takes his responsibilities seriously, but his 'role' not seriously at all - as in the persona, not seriously at all.

Something about that must have permeated and grown in the years in-between. This time around it was ... different. And re-reading this thread just highlights the differences so incredibly, I'm glad I shared it last time.

Weirdly, this time it wasn't even about HH

or even me, it was so much more about awareness, capacity & willingness to serve taking the responsibility seriously, but the role not at all. And that might even sound egoic in some ways, but it wasn't, I was aware of my ego in moments, and others' egos in moments, but above and under it all was a calm and a not seriousness most of the time.

I just reposted in the ego is my friend thread this quote - after Sandy saying it was her that had to befriend her ego, not the other way around, be kinder and gentler to it, and DJ and Onceler discussing the 'not spiritual' seeking effects...the sweetness of life in the moments, or not sweetness, however it is.

... To the Self the world is but a colourful show, which he enjoys as long as it lasts and forgets when it is over. Whatever happens on the stage makes him shudder in terror or roll with laughter, yet all the time he is aware that it is but a show. Without desire or fear he enjoys it, as it happens.”

smiileyjen101 wrote:This is why, for our own good and that of society we need to balance material progress with inner development.

Material progress is a simple enough thing to understand. As with so many things, some is good, and too much or too little is not. The DL is quite sensible on such topics.

Inner development can be seen as a war launched upon ourselves.

Inner development can be seen as just another form of greed, not really so different than material greed, sexual greed, social position greed etc.

Inner development can be just another manifestation of the self rejection which we hide from in becoming trips of one flavor or another. Labeling a becoming trip as "inner development" and attaching a happy face icon does not change it's fundamental nature, it's still a process of rejection.

Inner development can be a form of arrogance, where we presume we are wiser than evolution, God, or whoever or whatever it is that brought us to this place over billions of years.

Inner development can be a form of fantasy where we willfully forget the simple fact that the majority of human beings have no interest in philosophy and inner development etc, and yet they have lives just as fulfilling as our own.

Inner development can be a form of delusion that we are in control of our own destiny, when in fact the majority of our particular personal psychology was determined in the genetic lottery many years before we were born, and in those first few years of life before we could say our own names.

And so the show goes eternally on...
Top
Post Reply
28 posts